Difference between revisions of "Pages 591-610" 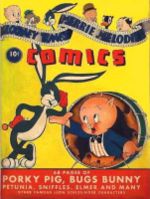 
See note on 545.04-05. Bugs Bunny, like Porky Pig, was a Warner Brothers, not Walt Disney, creation. He was featured in Looney Tunes and Merrie Melodies Comics beginning with issue #1 in 1941. He did appear under his own name in issues of Dell's Four Color Comics (which featured characters from several studios, including Disney) under his own name beginning with issue #3 in 1943.

594.31 Albert Krypton
Krypton is not only a colorless (not white), odorless, and tasteless inert gas but the home planet of Superman, destroyed in a natural nuclear chain reaction.

600.0506 the same warm and wonderful organization that was charging fifteen cents for coffee and doughnuts, at the Battle of the fucking Bulge
Supposedly an actual event, although officers (of course) did not have to pay

600.19 "love in bloom"
"Love in Bloom" of a song composed by Leo Robin and Ralph Rainger for the 1934 film She Loves Me Not, starring Bing Crosby. The song was later better known as Jack Benny’s theme song.

605.21 Va-len-cia-a-a
"Valencia" was originally a French song with words by Lucienne Boyer and Jacques Charles, written in 1925. The American version was released the following year.

605.37-38 Ya salimos
These and the following words in Spanish are from "Viva la Quince Brigada" ("Long Live the 15th Brigade"), a song of the American volunteer Lincoln Battalion during the Spanish Civil War. The tune is adapted from an old Spanish folk song and the words refer to the bloody battle of the Jarama Valley, which was the Loyalist battalion’s first taste of war. The words of the last two verses follow:

607.1 puto and sinvergüenza
Spanish, 'fucking' and 'scoundrel'. Manuela can now afford to call her loathsome client names (nominally for being impotent).