Difference between revisions of "Pages 60-71"

Sodium Amytal
Also known as "truth serum", Amobarbital is a drug that is a barbiturate derivative. It has sedative-hypnotic and analgesic properties. It is a white crystalline powder with no odor and a slightly bitter taste. It was first synthesized in Germany in 1923. If amobarbital is taken for extended periods of time, physical and psychological dependence can develop.[1]

61.25 Got a hardon in my fist...
This song goes right along with the tune of "Bye Bye Blackbird," starting with the "Pack up all my cares and woe..." refrain that, in this YouTube, begins at about 0:52. 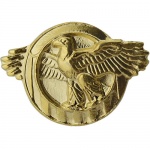 61.30 "ruptured duck"
A cloth insignia depicting a screaming eagle inside a wreath.

Roxbury
In the early 20th century, Roxbury became home to recent immigrants - A thriving Jewish community... A large Irish population... Following a massive migration from the South to northern cities in the 1940s and 1950s, Roxbury became the center of the African-American community in Boston. The center of African American residential and social activities in Boston had formerly been on the north slope of Beacon Hill and the South End. In particular, a riot in response to the assassination of Martin Luther King Jr. resulted in stores on Blue Hill Avenue being looted and eventually burned down, leaving a desolate and abandoned landscape which discouraged commerce and business development. [2]

Roseland Ballroom
Roseland was founded initially in Philadelphia, Pennsylvania in 1917 by Louis Brecker with financing by Frank Yuengling of the D. G. Yuengling & Son beer family, but in 1919, moved to 1658 Broadway at 51st Street in New York City. It was a "whites only" dance club called the "home of refined dancing", famed for the big band groups that played there, starting with Sam Lanin and his Ipana Troubadours. Couples danced the jitterbug, Lindy Hop, and Charleston under the Roseland's famed star-studded ceiling. The Fletcher Henderson Band played at the Roseland throughout the 1920 and 1930's. Orchestras that played the venue included Vincent Lopez, Harry James, Louis Armstrong, Tommy Dorsey, and Glenn Miller. The appearance by Count Basie was a turning point in his career and a break though in the all-white atmosphere of the club. One of his songs was to be the "Roseland Shuffle". [3]

63.5 Moxie
A carbonated beverage that was one of the first mass-produced soft drinks in the United States. In its advertising, it used “Make Mine Moxie!” advertising jingles, the slogan “Just Make It Moxie for Mine”, and a "Moxie Man" logo. The brand suffered a significant decline in sales during the 1930s.

63.22 Red, the Negro shoeshine boy
Stating the obvious, Red is Malcolm X, whose nickname "Red" referred to his hair color -- a dark cinnamon brown. In February 1941 Malcolm moved to Boston to live with his older half-sister, worked a variety of jobs including shoeshine and became involved in Boston's "underworld fringe," pimping among other things.

63.32-37 "Yardbird" Parker is finding out [ . . . ]
Refers to jazz saxophonist Charlie Parker. Correspondent Igor Zabel offers the following addition to Weisenburger's note on this passage: "On one of Parker's CDs (Swedish Schnapps +), I found the passage which was quoted by Weisenburger after Max Harrison, but slightly different, and it is interesting because Parker directly mentions Cherokee: 'Well, that night, I was working over 'Cherokee' and, as I did, I found that by using the higher intervals of a chord as a melody line and backing them with appropriately related changes, I could play the thing I'd been hearing. I came alive.' The quotation is taken from 'Hear Me Talkin' To Ya'."

64.19 "'Slip the talcum to me, Malcolm!'"
This homoerotic scene seems based on some facts. It is known that Malcolm X prostituted himself for money and according to Bruce Perry's biography, Malcolm: The Life of a Man Who Changed Black America (Station Hill, New York, 1991) he had various homosexual liaisons throughout his life. Interestingly, Malcolm worked as a butler to a wealthy Boston bachelor, William Paul Lennon. According to Malcolm's sidekick Malcolm Jarvis, he [Malcolm] was paid to sprinkle Lennon with talcum powder and bring him to orgasm.

65.15 "Gobbler" Biddle
The Biddles are one of the leading families of Philadelphia, who sometimes vacationed in the Berkshires. Specifically, the "Gobbler" could be Nicholas Biddle (Harvard, 1944).
Interestingly Francis B. Biddle (Harvard College 1909, Harvard Law 1911) was US Attorney General (1941-1945) at this time. FBB was responsible for directing the FBI to arrest "enemy aliens" leading to Japanese-American internment camps; served as the primary judge during the Nuremberg war crimes tribunal; and authored of The Fear of Freedom and other works.

65.16 Fu’s Folly in Cambridge
Although, as Weisenburger notes, the character is named for Fu Manchu (who is an important reference for Pointsman later in the novel), it should be recalled that there was also a "Fu" who was a member of the Whole Sick Crew in V.

Resembles the old Young & Yee Restaurant (now closed) at 27 Church Street, Harvard Square, Cambridge, MA, which for over 40 years slopped greasey chop suey. An anachronism to the novel's time period, yes, but perhaps an inspiration to the author.

65.33 Jack Kennedy
Contrary to Weisenburger, Kennedy’s first book was titled Why England Slept (not "When").


JFK is said to be in Slothrop's Harvard class. Estimating, Slothrop was born ca 1917-18 and entered Harvard in 1936, the year of Harvard's tricentennial. They were both in their mid-20s during the action in GR.

66.39 Capehart
The Capehart automatic phonograph with a turn-over mechanism was the epitome of luxury phonographs, technical excellence and supreme electronics in the 1930s and 40s.

68.01 Half an Ark’s better than none.
For Crutchfield, there is only one of everything, as opposed to two of every animal on Noah’s (whole) Ark. (And how much use is half an Ark in a flood, anyway?)

69.14 a bandana of the regulation magenta and green
The coal-tar derived colors of organic chemistry that resonate throughout the novel.
The visual clash between these colours appears elsewhere - 'A bit of lime green in with your rose' 12 Pynchon seems to associate positive things with these colors - see Against the Day particularly - as he does with bandanas. A-and bananas.

69.16 Rancho Peligroso
Evokes the Siege Perilous of the Arthurian Grail legend as well as Rancho Notorious, a 1952 Western directed by Fritz Lang and starring Marlene Dietrich. See note at V321.06-07

69.27 callipygian rondure
callipygian -- having shapely buttocks, originally used in conjunction with the noted statue of Aphrodite (which is itself a play on "Afro" and "Venus"), the "Venus Kallipygos".


Correspondent Matthias Bauer notes that "sam" derives from the German "samen," for "seed." "Krypto," of course, derives from the same word as "cryptography," the study of codes. Weisenburger claims that the "tyrosine" from which kryptosam is supposed to derive is "undoubtedly fictional," but it is in fact an amino acid, which can convert to melanin, just as Jamf's note indicates (although it is unclear whether semen will in fact act as the catalytic agent).


Tyrosine is found in casein, and the name derives from the Greek, tyros meaning cheese.


Significant properties of note for Tyrosine:
- Tyrosine functions as a phenol, which Nazi doctors used in injections for rapid executions. Phenols were used extensively at Auschwitz-Birkenau.
- Tyrosine occurs in proteins that are part of the signal transduction process -- a biological processes that converts one kind of signal or stimulus into another -- cell signalling.