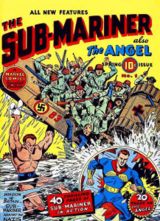 Blackhawn
Atlantean had no need for a battery-powered vehicle since he could breathe and swim underwater at high speeds (see picture on linked cover). Second, despite his team-ups with other groups during the war, he does not seem ever to have been part of a "multi-lingual crew." It may be that Pynchon never actually read the comic book. (His other superhero references — including Superman, Batman, and Wonder Woman — are mostly to heroes from Marvel’s publishing arch-rival, the DC publishing group.) Pynchon may, like many of the comics’ readers, have pronounced the hero’s name "Subma-REEN-er" and assumed that he actually commanded an underwater vehicle. He may have confused this character further with Blackhawk, the flying ace who did command a "multi-lingual crew" (including American, English, Dutch, Swedish, Free French, Polish, and a horrible, racist portrayal of a Chinese cook)!

752.07 The Lone Ranger will storm in . . .
The Lone Ranger began as a locally-produced program on Detroit radio station WXYZ (which also produced Sergeant Preston of the Yukon and The Green Hornet). It began its television life (with Clayton Moore in the title role) in 1949 on the ABC network. The real name of the Ranger was John Reid. Dan (Jr.) was his nephew, son of John's murdered brother. Dan was featured in a number of radio and TV episodes (and would eventually be the father of Britt Reid, the secret identity of the urban vigilante The Green Hornet!). Here, the Ranger and Tonto are too late to save the nephew. See note at 376.36