Difference between revisions of "V. Squared" 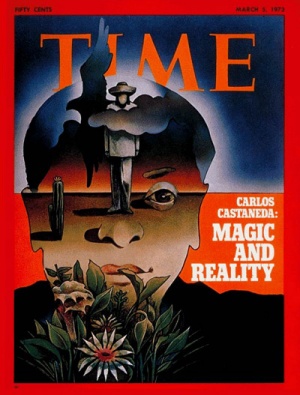 The novels of Thomas Pynchon seem to take place in a vast, unfathomable cyclotron. Characters, ideas, metaphors, styles, pains, ecstasies, assorted objects from the Pyramids to paper clips all whirl about at enormous velocity. They collide, split into new forms, or suddenly decay, leaving behind only enigmatic smiles.

This is not a surprise to anyone who read Pynchon's celebrated 1963 novel V. That book presented Herbert Stencil, Benny Profane and the Whole Sick Crew. It encompassed alligator hunts in the sewers of New York; a native uprising in South West Africa in 1922; the siege of Malta, circa 1942. The whole thing was wrapped in an unresolved quest for V, a woman who never revealed herself.

Three years later came The Crying of Lot 49, which seemed to be about the search for a 16th century postal service believed to be secretly operating in 20th century America. Random clues flowered into leads that might or might not have had anything to do with the truth.

And now Gravity's Rainbow, which is V. squared and 49 cubed. It is a funny, disturbing, exhausting and massive novel, mind-fogging in its range and permutations, its display of knowledge and virtuosity—a metaphysical, phenomenological, technological Mad Comic. The author seems to have read and understood everything from quantum mechanics, probability theory and engineering manuals to the labels on bottles of 1920 Schloss Vollrads, Tarot cards and rock lyrics. This, and much more, Pynchon catalogues and tickles into fantasies so elaborately detailed that most of his readers will come away feeling illiterate in the terms of the 20th century.

Even more than Pynchon's previous novels, Gravity's Rainbow is about man the symbol-making animal desperately trying to build a protective system of meaning over his head while at the same time blind technology increases the odds that something will bash his head in. Pynchon begins, appropriately enough, in wartime London, with German V rockets (V1 and V2) raining random destruction on the city.

Characters with typical Pynchon names cope in various ways. Pirate Prentice, a source of sentiment and life's small pleasures, whips up a batch of fried bananas. Elsewhere, Statistician Roger Mexico plots the distribution pattern of the rocket strikes according to a probability equation. But his data is no help. The odds of getting killed remain constant. "Each hit is independent of all others," Roger explains. "Bombs are not dogs. No link. No memory. No conditioning."

Other characters seek refuge from anxiety in airless logic, superstition, nostalgic memories, magic or endeavors like Film Critic Mitchell Prettyplace's 18-volume study of King Kong. There is a plot of sorts. The antics of Pynchon's odd crew cover a conspiracy to build their own V rocket and fire it off. Aimed at what and for what purpose? Who knows? Making a rocket from scrounged parts seems to be like making a philosophical system or a mystic cult. It is something humans simply have to do.

Double Agents. Pynchon's plot leafs out riotously, according to his fertile imagination and extraordinary talents, which include writing raucous ballads. Members of this secret rocket-building conspiracy appear to be double agents, at the very least. Allegiances are never clear. As the years pass and the search for parts continues all over postwar Europe, loyalties fade and new, complicated patterns suggesting international business cabals emerge. Everyone seems to be a part of an incomprehensible engine whose function is to generate paranoia. Call it history; call it the modern world where science and technology change the rules faster than they can be written.

Few novelists seem to understand this aspect of future shock better than Pynchon. Fewer are able to handle scientific data as fact and metaphor as well as he. Those looking for reassurance in a confused time will not find it in this book. Gravity's Rainbow is for those who enjoy sustained bombardment by a remarkable mind and talent.

Pynchon the man remains as mysterious and private as always. Even the critical acclaim for V. could not get him to reveal himself to the public. As publicity shy as J.D. Salinger, as shadowy as B. Traven, Pynchon, who is now 35, does not grant interviews and will not allow himself to be photographed. Those who knew him at Cornell in the mid-1950s recall a tall, thin man who breakfasted on spaghetti and soda pop, maintained an above-90 average in the physics department and was very self-critical where his creative writing was concerned.

He went to Cornell from Oyster Bay, Long Island, where his father was once the town supervisor. After two years he left college for a two-year hitch in the Navy, then returned to Cornell to finish near the top of his class, this time as an English major. V. was written on a $500 advance in New York. But Pynchon soon fled the city for Seattle, where his abilities as a mathematician and writer got him a technical writing job at Boeing Aircraft Co.

Then he fled again, this time from the notoriety created by the critical success of V. He is still moving, given away to the public only by his books, like one of those high-energy atomic particles that are never seen but whose existence is inferred from the traces they leave behind.