Wafna, Count
491; passenger aboard the Anubis

Wagner, Professor
452; "of Darmstadt predicted that at speeds above Mach 5, air would liquefy"


German composer and theorist whose operas and music had a revolutionary influence on the form and harmony of Western music. His major works include The Flying Dutchman (1843), Tannhäuser (1845), Lohengrin (1850), Tristan und Isolde (1865), Parsifal (1882), and his awesome tetralogy, The Ring of the Nibelung (1869-76) "Bürgerlichkeit played to Wagner, the brasses faint and mocking, the voices of the strings drifting in and out of phase" 324; "Wagnerian battlements" 393; Wagner played on Toiletship, 450 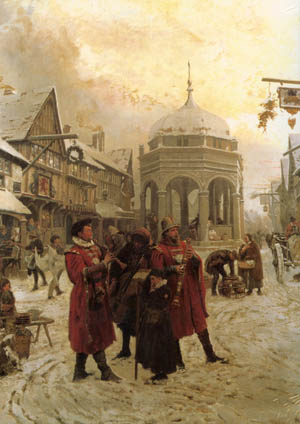 
128; "join the waits"; Leicester's ancient tradition of Town Waits — official musicians who supported the Lord Mayor at civic events, entertained townspeople and feted visitors. The waits were originally guards or watchmen who walked round the town at night looking out for fires or other trouble. They rang bells to tell people the time, or called out '2 o'clock and all's well'. They also played music for the Lord Mayor's guests on big occasions, and entertained the general public. This became their main job. By 1900 the waits' instruments were a cornet, a euphonium, a tenor horn and a trombone. From then, the waits mostly played popular requests for a small fee, which was given to charity. By the 1940s, a request would cost about half a crown (12p). The Leicester Waits were disbanded around 1947. [1]

Walpurgisnacht
293; German: St. Walpurgia Night. The night before May 1, originally dedicated to St. Walpurgia, the 8th century English nun who founded religious houses in Germany. It is associated in German folklore with the witches' Sabbat on the Brocken, where the witches and sorcerers perform their black rites and reaffirm their subservience to the demon Master.

Waltz of the Future
296; "the strangely communal" in Raketen-Stadt

Wandervogel
99; (German: "bird of passage"); Thomas Moore: "organization, founded in 1901 as a boys' hiking and nature club, readily became, as it spread over the country, a plastic-deformable movement against all establishments of the fathers. Conscious Wandervogel politics varied across the spectrum, but all cells aggressively idealized nature, soil, soulfulness, and the spiritually exalted Bund ["brotherhood"] of youth." (p.208); 670

Washington, George
254; "old motherly femme de chambre"'s hair is done up like his


95; northern district of The Hague, near Schußstelle 3

Wasserkuppe
454; according to Baedeker, this is a 3115-foot mountain near the ancient town of Fulda in northeastern Germany.

Watson and Rayner
In 1920 the American psychologists John B. Watson (1878-1958) and Rosalie Rayner employed classical conditioning techniques to demonstrate the development of an emotional response in a young boy ("infant Albert"). The presentation of a white rat was paired with the striking of a steel bar, which induced fear in the little boy. After only a few pairings, the white rat became capable of inducing fear responses similar to those produced by striking the bar, suggesting to psychologists that many human motives may result from the accidental pairing of events; conditioned "Infant Albert" into "a reflex horror of everything furry" 84, 86

Waxwing, Blodgett
246; specialist in phonying documents; his calling card has a cheSS knight and his address is on the Rue RoSSini in Zürich; escapee from the stockade Caserne Martier in Paris; meets Slothrop at Raoul's party, wearing a zoot suit; Zootsuit Zanies, 251; provides Slothrop the identity "Ian Scuffling, English War Correspondent" when he goes to Zürich, 256; 620

Wayne, Corporal
11; Pirate's "batman" who drives him out to a bomb hit


325; German sociologist and economist; the A4 "really did possess a Max Weber charisma" 464; See also Routinization/Rationalization of Charisma


This Austrian composer valued the oriental qualities of brevity, objectivity and fine decoration, wishing to mirror the perfection of mountain flowers and crystal specimens. He studied under Arnold Schoenberg and adopted a strict 12-tone composition style in 1924, using the 12-note system in everything he wrote.

"This rainy morning, in the quiet, it seems that Gustav's German Dialectic has come to its end. He has just had the word, all the way from Vienna along some musicians' grapevine, that Anton Webern is dead. 'Shot in May, by the Americans. Senseless, accidental if you believe in accidents — some mess cook from North Carolina, some late draftee with a.45 he hardly knew how to use, too late for WW II, but not for Webern. The excuse for raiding the house was that Webern's brother was in the black market. Who isn't? Do you know what kind of myth that's going to make in a thousand years? The young barbarians coming in to murder the Last European, standing at the far end of what'd been going on since Bach, an expansion of music's polymorphous perversity till all notes were truly equal at last....Where was there to go after Webern?'" (440-41)

"nobody gonna pull an Anton Webern on him" 443; "'As to some musical ears, dissonance is really a higher form of consonance. You've heard about Anton Webern?'" 494; Wikipedia entry]

Wehrwirtschaftstab
German: "Economic Defense Staff"; "a section of the General Staff that maintained the OKW's liaison with industry" 630

Weichensteller
453; one of "the reentry people" at Peenemünde

Wends
Group of Slavic tribes that by the 5th century AD had settled in the area between the Oder River (on the east) and the Elbe and Saale rivers (on the west), in what is now eastern Germany. During their periodic rebellions against both Slavic and German overlords, the Wendish peasants would also repudiate Christianity; "white-gloved" aboard the Anubis, 467

werewolf
Besides the obvious folk-mythological associations, the "Werewolves" was an underground army recruited and trained in 1945 for guerilla warfare against the Allies who were in the process of occupying Germany; "were-elves streaking in out of the forests at night" 125; "a terrible beastlike change coming over muzzle and lower jaw, black pupils growing to cover the entire eye space till whites are gone and there's only the red animal reflection" 196; "hock of werewolf, gammon of Beast" 295; 486; "Werewolf stencils of the dark man with the high shoulders and the Homburg hat" 624; "lycanthropophobia or fear of Werewolves" 640; See also Mythology

Wessel, Horst (1907-1930)
The composer of Die Fahne Hoch ("Raise High the Flags," aka "Horst Wessel Lied") which was the Nazi "theme song." Interestingly, Herr Wessel, an SA (Sturmabteilung, aka Brownshirts) man, was killed in a street-fight with communists in 1930. Perhaps he traded a few blows with Mr. Sachsa who died that same year in a street-fight with Brownshirts. Coincidence? You decide; Die Fahne Hoch, 653; "I was a Storm Trooper [...] like Horst Wessel" 717

Whitehall
144; Britain's center for government in London. Eponymically named for Whitehall Palace which was located there but burned down in the late 17th century; 171; 201; 454; 635
The White House 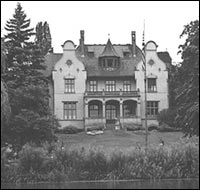 
AKA The Little White House, 381-82; Kaiserstrasse 2 in Neubabelsberg, Truman's residence during the Potsdam Conference in July 1945, where Slothrop dug up Bodine's stash. [Note: thirteen years after the "Fall of the Wall," Kaiserstrasse still goes by its East German name-change of Karl Marx Strasse!]

White Lotos Day
269; "the Blavatskian wing of Psi Section, who were off on a pilgrimage to 19 Avenue Road, St. John's Wood"; "White Lotus Day" — May 8 — is celebrated yearly by Theosophists as the day of death of Madame Helena Petrovna Blavatsky.

White Sheet Ridge
232; "a tattered tommy up on"

White Woman
Gottfried "dreams often these days of a very pale woman who wants him, who never speaks--but the absolute confidence in her eyes" 103; "the Evil Hour, when the white woman with the ring of keys comes out of her mountain" 374; waiting for Slothrop, "back behind the Spree" 439; "the great Kalahari painting of the" 658; "the pale Virgin was rising in the east" 694; See also death; Evil Hour

White Visitation
34; former mental hospital located in the fictional town of Ick Regis on the coast of southern England; now part of SOE; location of PISCES; D-Wing still has "loonies"; "devoted to psychological warfare" 35; "they're all wild talents--clairvoyants and mad magicians" 40; 72-74; described, 82-83; D-Wing, 230; 533; 627

Whitney, John Hay (1904-82)
American multimillionaire and sportsman who had a multifaceted career as a publisher, financier, philanthropist, and horse breeder. In 1942 he joined the Eighth U.S. Army Air Force as a captain in the Combat Intelligence Division and was captured by the Nazis in southern France. He escaped and in 1945 was awarded the Legion of Merit; "Harrimans and Whitneys gone, lawns growing to hay" 28

Whitsun
269; In England, White Sunday is the seventh Sunday after Easter; 628

Whittaker and Watson
55; co-authors of a mathematical treatise entitled Modern Analysis. An old copy is owned by Roger Mexico

Whittington, Dick (d. 1423)
A colorful London personality, Dick served three terms as lord mayor of London: 1397-99, 1406-07, and 1419-20. The GR passage refers to the popular legend that has Dick Whittington as a poor orphan worked in the kitchen of a rich London merchant. He ventures his only possession, a cat, as an item to be sold on one of his master's trading ships. Ill-treated by the cook, Dick then runs away, but just outside the city he hears the ringing of bells that seems to say "Turn again, Whittington, Lord mayor of great London." He returns to find that his cat has been sold for a great fortune to a Moorish ruler whose dominions are plagued with rats. Now wealthy, Whittington marries his master's daughter, succeeds to the business, and then becomes thrice lord mayor of London. ; "'I'm fucking Dick Whittington!' it occurs to [Mexico] zooming down Kings Road, 'I've come to London! I'm your Lord Mayor....'" 637

Wien bridge
Wilhelm Wien (1864-1928) was a German physicist who received the Nobel Prize for Physics in 1911 for his displacement law concerning the radiation emitted by a perfectly efficient blackbody. Further investigations by Max Plank resulted in his quantum theory of radiation. The Wien bridge is a four-arm a.c. bridge, the variable frequency being determined by a resistance in an arm of the bridge, and, as Weisenburger points out, was used in the automatic steering of the rocket; "Sometimes you'd use a Wien bridge, tuned to a certain frequency A-t, whistling, heavy with omen, inside the electric corridors" 517

Wilcoxon, Henry
559; "'[children] rowin' old Henry Wilcoxon away into th' sunset to fight them Greeks or Persians or somebody'" 559

Wilheml, Richard
403; "One of these German mystics who Mondaugen grew up reading"

Wilhelmplatz
370; site of active blackmarketeering in Berlin, now with "Russian security all over the place"

Willkie, Wendell (1892-1944)
135; First a lawyer, then an industrialist, Willkie switched from Democrat to Republican and was narrowly beat by F.D. Roosevelt in the U.S. presidential election of 1940. Between 1941 and 1942 he travelled the world representing the FDR.

Windhoek
352; capital of Südwest, where Enzian's birth was duly recorded by the Germans; [MAP]

Winthrop, Governor
204; came over to America on the Arbella in 1630

Wobbly
571; 355; Wobbly is slang for a member of the Industrial Workers of the World (I.W.W.), a former international labor organization favoring socialism and the abolition of the wage system; "German Wobbly traditions, they didn't go along with Hitler though all the other unions were falling into line"

Womack, Flash
584; a pinball wizard, one of "the great thumbs of Koekuk and Puyallup, Oyster Bay, Inglewood"

Wounded Knee
hamlet and creek on the Pine Ridge Indian Reservation in southwestern South Dakota, in the U.S., which was the site of two conflicts between North American Indians and representatives of the U.S. government. On Feb. 27, 1973, some 200 members of the American Indian Movement (AIM), led by Dennis Banks and Russell Means, took the reservation hamlet of Wounded Knee by force, declared it the "Independent Oglala Sioux Nation," and vowed to stay until the U.S. government met AIM demands for a change in tribal leaders, a review of all Indian treaties, and a U.S. Senate investigation of treatment of Indians in general. Two Indians and one federal agent were killed in the ensuing battle in which the feds prevailed; "the guns that raked through the unarmed Indians at" 697

Wuxtry-Wuxtry, Mickey
738; "Wuxtry wuxtry, read all about it"; "world-renowned analyst" -- "There never was a Dr. Jamf"