Difference between revisions of "Pages 371-383"

Berliner Luft
German: "air of Berlin." It is an often-used phrase, in the sense of the special Berlin atmosphere.

375.21 something in that rocket needed potassium permanganate
The turbopump used calcium permanganate. Whatever caused the shortage of the purple stuff, it wasn't the rocket.

376.31-33 the knight who leaps perpetually -- across the chessboard of the zone
In Through the Looking Glass, Alice attempts to get to the other end of the chessboard to become a queen herself. Along the way she is helped, without much success by the White Knight.
The conversation and reactions here between Saure and Slothrop are almost a pastiche of the Alice stories. By 1973, when GR appeared, "acid" and Alice were of course linked forever in the popular consciousness -- largely thanks to Jefferson Airplane.


Zorro and the Green Hornet are two masked superheroes Slothrop would know from comics and movies. Douglas Fairbanks starred in The Mark of Zorro in 1920, not 1932, as in Weisenburger's first Companion edition, corrected in the second ed.. Tyrone (!) Power starred in a sound remake in 1940. Britt Reid, the secret identity of The Green Hornet, was the son of Dan Reid, the nephew of the Lone Ranger.

377.1-2 The wrong word was Schwarzgerat.
Yes, the mythical White Woman is scared away by mention of the "black tool." Clever innuendo/double entendre here. Also possiblly underscoring that the White Woman relates to Virgo(?).

377.31-35 photo...long, stiff sausage of very large diameter being stuffed into his mouth...though the hand or agency...is not visible
Reminiscent of the photos of Margaret, Duchess of Argyll fellating a naked man where only the man's face and torso, not his head, is shown.

A stork flies over, going home...
Could this be an allusion to Goethe's Faust, line 746: "Der Kranich nach der Heimat strebt." (The crane endeavors to reach the homeland.)?

Hauptstufe!
Compare the radio Superman’s words as he is about to fly: "Up, up, and away!" 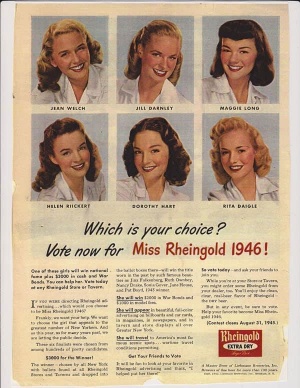 381.10 When they part company, the newshounds are discussing the candidates for Miss Rheingold 1946. Dorothy Hart’s advocates are the loudest, but Jill Darnley has a majority on her side. It’s all gibberish to Slothrop—it will be months yet before he runs into a beer advertisement featuring the six beauties, and find himself rooting for a girl named Helen Rückert: a blonde with a Dutch surname who will remind him dimly of someone...

382.15 Mickey Rooney
Rooney was in Germany, attached to an Army entertainment unit, at the time of the Potsdam Conference but was unable to go to Potsdam and meet Truman himself. However, there is a more likely, if more obscure, reason for the movie star’s presence here: Rocketman’s second magazine, Hello, Pal Comics, only lasted for three issues. The Comic Buyer’s Guide notes, though, that the comic was unusual because it featured a photograph of a movie star on the cover of each issue. The cover of issue #1 was devoted to Mickey Rooney! Also see my article: "Rooney and the Rocketman" Pynchon Notes n 24-25 (1989): 113-115. See note at 366.

382.21-22 more tits than they got at Minsky's
The four Minsky brothers, Abe, Billy, Herbert and Morton, staged burlesque shows at a number of theaters in New York City. Although the shows were declared obscene and outlawed, they were rather tame by modern standards.