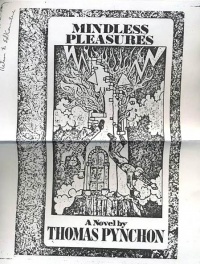 Not universally known is the working title that the manuscript circulated with in publishing houses before it was changed: Mindless Pleasures. Many paperback houses got the manuscript under that title to read for paperback consideration. At least one person claims to still have it that way. That title picks up a concept articulated in Pynchon's first published short story, The Small Rain.

Why isn't it called "Mindless Pleasures" or one of the myriad other working titles (none of which I can remember, but they're hilarious and I just looked for an hour and can't for the life of me remember where I saw them all) it possessed prior to its settling on that perfect title. One interpretation that "gravity's rainbow" is the parabola described by the rocket's trajectory from launch to hit, as the projectile gradually loses its battle with gravity and is finally pulled back to earth following Brennschluss. This interpretation is reinforced by the original hard-cover editions of Gravity's Rainbow, which have a parabola intaglioed into the front cover. But! There are, as usual, many ways to skin this cat, to wit:

Gravity's rainbow could also be the many colors synthesized from coal-tar:

One reading of the title is that "gravity's rainbow" is the parabola of a ballistic missile's flight, halted on the final page a "last unmeasurable gap... the last delta-t" over our heads: fiery destruction held in abeyance. For now.

The connection between the parabolic flight path of the Rocket and a rainbow is made explicit in an important discussion of the rocket's trajectory (p. 209):

Gravity is also what gives objects massed weight. Cf. a major evil character taking on mass in Against the Dayp.743

Centre, how from them all :you draw yourself, even from flying creatures :win back yourself, centre, the strongest.